New reviews/awards, a new partner in Canada, and some product development updates

Things have been busy per usual here. We've got a new team member (hey James!), went to CES, made some new partnerships, and--as always--have been working on improving the product line.

Our friends up north at NCIX are our first (and currently only) reseller there to now sell the Modmic! If you're in Canada and want to purchase mic, go get one and avoid the pain that is USPS international shipping!

We don't always pick up awards--because we're a niche product, right?!?--but when we do, it's in European countries:

Danish site Eurogamer.dk liked the ModMic enough to hook up the Editor's Choice award! Tak! I'll say ... and that's as far as my Danish goes. Check out the review here.

French site lecafedugeek.fr reviewed our mic and awarded us the Golden Cappuccino! Je ne peux pas parler français, myself, but if you do, the review may be of interest. Many thanks to Eurogamer.dk and lecafedugeek.fr for the reviews and awards!

Eli and I went to CES '15 in Vegas and had a good time. You guys ever try Four Loko? It's terrible. We got a little crazy with our Massdrop friends, shook a lot of hands, read a lot of badges, walked miles and miles, and got to play with some fun stuff. Here's me seeing the line and realizing that I'd better make a reservation for the Oculus Rift Cresent Bay demo: 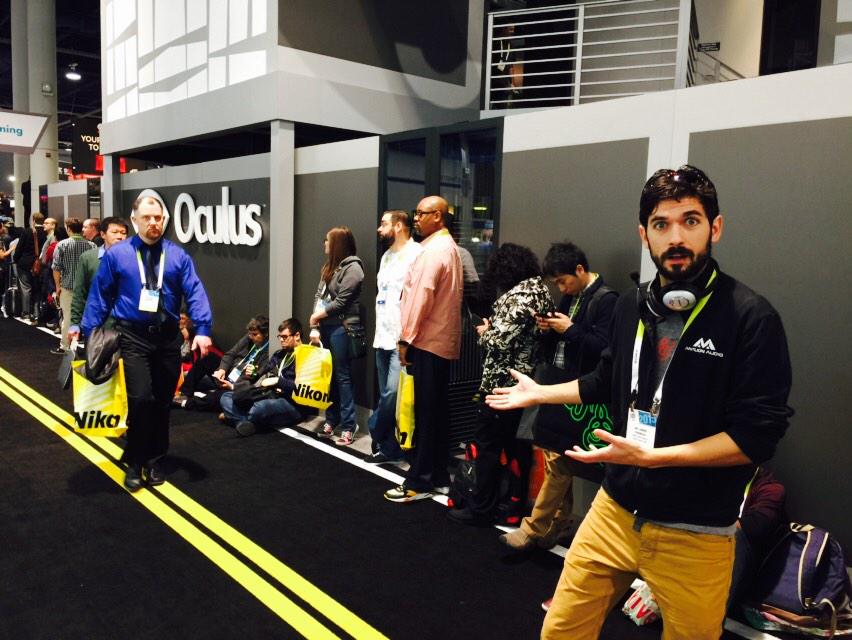 While we learned a lot here (no booth this time) we're not sure if CES will give us the best return on investment in the convention realm. Any suggestions- PAX etc.?

The mute button is being worked on to reduce "mute pop." We're bucking the domed sticker on the screw cap for an etched matte cap with better life and a little less flashiness.

We're also tweaking the cable composition to maximize suppleness yet maintain a rugged enough cable that can be run over by chair wheels and be pulled without stretching (tensile strain differences in the cable components caused some failures in the early 4.0s).

When do these plans all get implemented? Hard to say. Hoping to have omni-directional mics up within a month or two. At that time we should also be on AMAZON.

Do let us know if you guys know of a good reseller in your country who'd be interested in selling our products. Most of our resellers have been suggested by customers and it's been great to be able to avoid shipping things internationally.