I began my Magic journey way back in the days of Paradise Birds and Black Lotus in the early 90s, continuing through about Onslaught in 2002. I stepped away from MTG for many years due to just generally losing interest as well as leaving to college. This was, until I was pulled back in by a group of friends at a new job sometime around Theros and Core 15 around 2013. What started as a bunch of new friends battling it out during lunch for fun, or playing the occasional tournament at the local B&M, eventually turned to a full-fledged standard format addiction with a healthy itch for the pro tour circuit. I hit up PTQ’s and every small time tournament I could make time for without losing my job, but eventually the money and the time took its toll and I was forced to step away once again. To say the least, I have always had a bit of an itch to go back, I attempted to play MTG Online but never really got into it past a practice tool for tournament play. I had a few friends that recommend Hearthstone in the past, so I did a little research. At the time I had come to the conclusion that it was overly expensive to be competitive and had a very tight meta that looked only to be tightening. That combined with what I considered, adolescent game play and combat tricks really made me close minded about the game from day one.

Enter Whispers of the Old Gods patch… I got a message from a friend that said I had to hear about the Hearthstone patch. Be grudgingly I humored him and accepted his Skype call, as he rambled on about new card combos and free packs my eyes began to glaze over. Then the words new Standard format came out of his mouth and immediately my interest was peaked. He gave me the rundown of the two-year card lockout, set rotations, and what seemed to be the fix to the looming meta issues. I was jacked up and ready to give this game a shot, for the first time Hearthstone was on my radar.

My journey through the new standard format was a surprisingly exciting one, upon leaving the tutorial and finding arena play I immediately felt at home. My first draft was a little rough and I went 2/3, but I learned that you don’t draft anything like Magic. My next journey down the arena path was a bit smoother and I was able to keep alive for longer. With each pack that I opened I saw how this format was changing the face of Hearthstone, combat tricks where prevalent and cohesive, making decks easy to envision and execute.

This is an exciting step for Hearthstone, for me as a new player it finally removed the daunting task of acquiring five years’ worth of meta in order to be competitive. These changes also open the door for more serious tournament players to grow the game and push it to new limits while allowing new players to rise the ranks as the game evolves. Most of all it allows the developers to escape a self-proclaimed meta rut they had found themselves in and evolve the gameplay to keep it interesting. I am finally excited about Hearthstone and look forward to future sets and the progression of the new standard format.  Blizzard looks to be on the right track and succeeded in converting this long time Magic player. 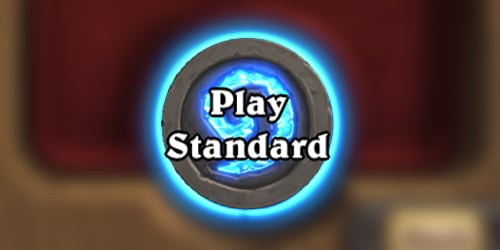 Yep, that's what I want.